Friday was our last day of “Culture Week” if you will. We would be doing two cultural activities: making kimbap (김밥) and playing Jangu (장구). We ended up taking the cooking class at the same location that I had Korean cooking club during the summer program for six weeks back in 2016. We met up at the station together (It was at this point in time that I spotted a pig cupcake in a display case at this cafe and I made the very bad decision of spending my stipend on a cupcake at 10 in the morning. No regrets though! It was delicious!) and then walked to the Food and Culture Academy. The walk was so familiar as we passed by the side street that I walked down with 수진언니 when I met up with her back in November (That blog post here~) and 통인시장 (Tongin Market). 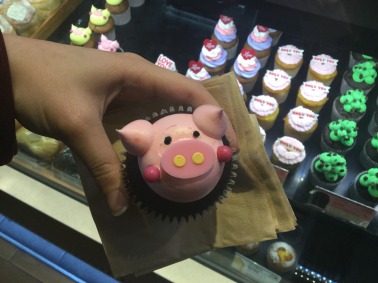 I was happy that we were being taught how to make kimbap (김밥–rice, veggies, and sometimes meat and egg wrapped in dried seaweed) because I never learned how to make it during 요리동아리 (cooking club). I eat 김밥 so often when I do not want to spend money on real food, so it will be nice to know how to make it when I go back to America. I can easily whip up some rolls when I am missing Korean food and this is something simple I can do for my friends and family back home. Cooking the kimbap was a lot of fun because I was able to joke around about my cooking skills with June and Josh who were at the cooking stations near me. We all struggled to roll our seaweed correctly to make sure that things would not unravel during the cutting process–which they still…kinda did. But regardless, all of our rolls ended up being delicious even if they were not the prettiest!

We got to enjoy our kimbap rolls with some nice warm egg soup. We received some certificates too for completing the cooking course~

After having our lunch, we made our way to have our 장구 (Jangu) playing lessons at the National Center of Traditional Korean Music. I have never been musically talented which has led me to not play any instruments throughout my life. Unless you count playing the recorder in the fourth grade. I did DO that recorder competition with the different colored strings that you would wrap around the bottom of the instrument as if they were karate belts. (Who else relates?) The teacher was really patient with us as she understood that everything we were doing was quite new! I struggled a lot trying to figure out how to hold the drumsticks correctly as well as keeping in pace with everyone else. It seemed as if I had one good run through with the music, the next one would have to be a fail to even things out. There was one point where I messed up the order of when to strike one half of the drum and I just put my hands up in defeat and stopped playing because I could not continue on with the others because I lost my spot. However, what made me more embarrassed was that when this happened… I made eye contact with the teacher! I felt ashamed for not being able to keep up. Even though I was not the best at it, I really enjoyed playing the instrument. While we were playing the music, I immediately felt rewarded hearing everyone playing together and when I did follow along matching the beat, I also felt good! I can see how doing this would also become calming once you get in the zone and just following the rhythm however you like.

After music class, a big group of the NSLI-Yians went to a 찜질방 (sauna/public bath) to celebrate Josh and Kaitlyn’s birthday which was today! (They share the same birthday but were born in different years!) I ended up just going home to have dinner with my host family when a different plan fell through. It was nice spending a chill Friday night in. My host sisters ate 회 together and since coming to live with them, I have become more accustomed to eating raw fish! And I actually do think it is good now!

I literally have no pictures from this day because I was not feeling well today. I woke up with a bad headache and my stomach was aching severely so I spent the whole day just laying around in bed doing no work whatsoever. I may have written some blog posts or something? But more likely than not I was just watching Youtube the whole time. At around 8 pm, I ended up meeting up with Josh. He was so kind as to come visit me and we went to a cafe near the subway station in the mall. We stayed there for about three hours trying to focus and do some work. Josh worked on workbook homework while I did Quizlet before quickly giving up and resorting to writing blog posts.

One funny thing that happened while we were at the cafe was that after we put our stuff down and approached the counter to order, we were being instantly stared at by the worker at the register and the owner (or higher positioned worker…) of the cafe. They were looking at us and watching us discuss what we wanted to order (in English). They seemed almost…nervous. I went up and asked for a hot green tea latte and as soon as those words left my mouth (in Korean if that was not obvious) the male worker smiled and the female worker signed in relief and remarked that she thought that she was going to have to speak in English. I did order in Korean; however, the worker continued to switch between Korean and English while taking my order. I just thought it was so funny to see them, at first, so visibly nervous to have us order and then feel so much relief when we proved them wrong–AKA show them that we could speak Korean. This area really does not get many foreigners. 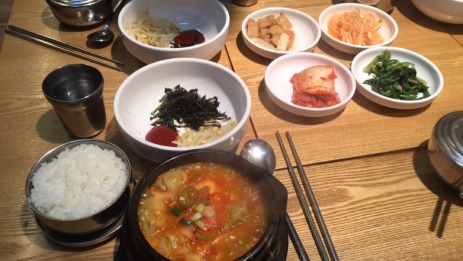 Well, that is all for this post! I hope you enjoyed~ Thanks for reading~ I hope the next blog post can be more interesting than this one~ Sorry, things were pretty hard to describe and I did not take a lot of photos so…. this is what you are stuck with for today :p

Lights Shining Brighter than Our Futures???🌃💛
1 shell to hibernate in during this winter, please 🤧
Alexa, play UCLA 🐻💙💛
Crushing on Cali 💫 But not quite on Kombucha 😝 (Photos Taken Before Taste Test)
Roaring 20s?? More like Rollin 20s😎
New Years Resolution: Become a life-sized teddy bear🐻